My revived work of approximately halfway-deranged fan-scholarship is taking up most of my time at present. (Most of the time, at least, when I'm not being a civil servant, learning to drive or changing my entire inventory of possessions in preparation for the increasingly imminent arrival of the fruit of my loins.)

However, I did want to record the fact that I've had time actually to read Iris Wildthyme and the Celestial Omnibus, and to offer a few thoughts on it.

As usual with books I've contributed to, this can't be in any sense considered a review. But I hadn't read any of the other stories before reading the book, so -- aside from knowing several of the authors, and that I share with them a project to demolish and rebuild various important works of fiction using the deconstructive tools of a talking panda and a mad old woman in a double-decker bus and a floppy hat -- I came to them relatively fresh.

In many ways, the first two stories are my favourites, showing as they do the range of genres and tones an anthology like this can cover: Steve Lyons's hilarious "A Gamble with Wildthyme" takes literally the idea of (of all things) dogs playing poker and frames it within a science-fiction setting, unearthing some brilliant jokes including a quite magnificent punchline. My fellow vampirologist Mags L Halliday's "Sovereign", by contrast, is a contemplative, elegiac piece set in a women's commune in a wintry 1960s Cornwall, which foregrounds Iris's romantic side to lovely effect. Between them they set things up wonderfully for the rest of the volume.

I'm not going to go through the stories one by one, mind you, so these are the highlights. The volume's editors each turn in a fab story (snuggled up cosily on either side of my less than timely Battlestar Galactica parody "Battleship Anathema"). Stuart Douglas's "Future Legend" is a funny but rather sad story of vicious sentient cats making the best of things at the end of time, while Paul Magrs's blisteringly funny take on Torchwood, "The Dreadful Flap", throws Iris in with Dracula, Noel Coward and a lost robot from Paul's last Doctor Who novel in a chaotic, sarcastic, carnivalesque medley. In Darlington.

My other favourite in the collection (which isn't to say that the others suck, by any means) was Cody Schell's "Iris Wildthyme y Señor Cientocinco contra Los Monstruos del Fiesta", a splendidly demented story where Iris joins forces with a Mexican luchador, the periodically-tabular Señor 105. Cody's story is his much-deserved first publication: it's cheerful, very silly yet oddly disturbing nonetheless.

At least two of the other stories are thoroughly great as well. If I've sold the book to you (and yes, obviously that is what I'm trying to do, rather than dispassionately appraising the volume), then you can buy it here.

Two further pieces of Iris news, and then I promise I'll shut up. Firstly, our first review's appeared online, and it's pleasingly appreciative. [Edit 15-6-9: Oh look, here's another one.] Secondly, Obverse Books have announced that a second anthology, The Panda Book of Horror, will be out later in the year.
Posted by Philip at 8:49 pm No comments:

Email ThisBlogThis!Share to TwitterShare to FacebookShare to Pinterest
Labels: reviews, the celestial omnibus

It's been quite a while since I did any photography, and my old camera seems to have died in the meantime. But I was quite pleased with these, taken wandering around a startlingly small area of central Bristol on Monday while thinking about borders, boundaries, thresholds and spaces between: 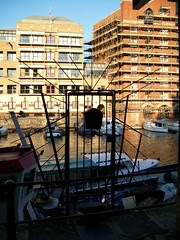 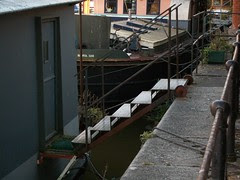 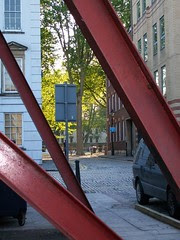 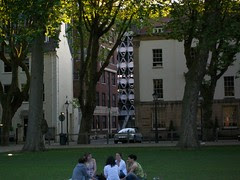 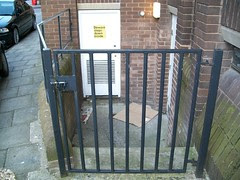 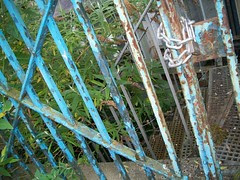 More here.
Posted by Philip at 7:04 pm No comments:

Email ThisBlogThis!Share to TwitterShare to FacebookShare to Pinterest
Labels: photos

I am Jack's Irritating Adolescent Self-Absorption

Up until last Sunday, I'd somehow managed to spend every second of the ten years since its original release not watching Fight Club.

This was, as it turns out, the right decision.

After all the praise I'd heard, I couldn't believe what a pile of faux-radical, pseudo-intellectual drivel it was. To be sure it's well made and well acted and the like -- and I did enjoy the animated Ikea catalogue sequence -- but almost everything about the story itself rubbed me up the wrong way.

The intellectual elitism of enlightened Tyler Durden saving the humble working man from his ignorant drudgery was so extreme as to border on the gnostic, while the film's message remained astonishingly dumb. As for the meretriciousness of multi-billionaire Brad Pitt informing us in a film funded by Rupert Murdoch's multinational Fox corporation that -- astonishingly -- people are not defined by their material possessions, while the media control what we see and hear... well, I think you can guess my likely reaction. (Plus did you know soap was made from, like, fat? Eww, gross, dude!)

I also object profoundly to the idea that men have been emasculated by society and can only reclaim their manhood by beating the hell out of one another and blowing stuff up. (Although I admit to having rather less of a problem with the shagging Helena Bonham-Carter part.)

It's true that Tyler Durden is, explicitly, barking mad, so it's possible that the film didn't intend to endorse this worldview of his. (Strictly of his alter ego's, as Tyler himself spends the film, in his intellectually shackled middle-class way, wriggling against it.) It wasn't sufficiently clear about what it did endorse, though, for me to have any confidence that this wasn't what it was doing. Certainly casting the charismatic Pitt in the Keyser Söze / Malcolm Crowe role didn't give me any confidence that his apparent position as a Nietzschean ubermensch was being especially problematised.

Factor in the cheap plays on the audience's disgust (the filthy house, the human-fat soap) and the asinine twist (which is about as difficult to see coming as Godzilla in East Anglia), and you have a film which rises above the handicap of its very decent acting and production values to stand proudly as appalling rubbish.

I'm sorry, I just hated it. It's put me right off the idea of ever reading any Chuck Palahniuk.
Posted by Philip at 5:59 pm No comments: