Embroiderer of the Daleks

My God. Over the past few weeks we've had (by which I really mean that baby R. has had) some wonderfully thoughtful presents -- including clothes, toys, books, DVDs and various containment mechanisms -- from a vast array of people we know, love and / or are related to, most of whom we've completely failed to thank so far. (If that's you, then sorry -- things have been a little bit hectic.)

Lovely thought they are, though, none of the others have been quite as wonderful as this handmade baby quilt: 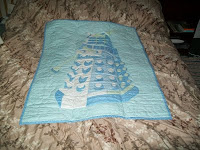 I knew the friend in question had taken up quilting, but I hadn't realised the results looked this impressive. I hardly dare imagine the amount of work she's put into it. 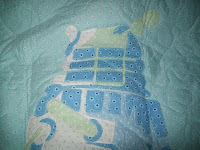 R. seems to appreciate it, anyway. 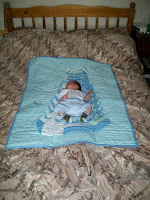 (I know, I know -- this isn't supposed to be a baby blog. To be honest I've not had terribly much time for books, TV or, well, a life over the past few weeks. They say it'll settle down soon -- hopefully by 2027 or thereabouts, I'm told.)
Posted by Philip at 1:31 pm No comments:

Things about fatherhood which are easier than I expected: Changing nappies[1]. Barely disgusting at all after the first half-dozen or so, and for reasons I won't trouble you with it gets less unpleasant still after the child's first week or so of digestion.


Things about fatherhood which are harder than I expected: The sleep deprivation. God, it's difficult. Still, if you haven't heard that before, you obviously haven't been hanging around enough new parents.


In other news... After a fortnight off, and four hours of sleep last night, I've managed to get back into writing in a small way today, so I'm no longer feeling as if that part of my life has been severed from me forever. Which is nice. It's just 500 words, but it's a start.

Another reason why I'm feeling like a writer again as well as a father is this substantial coffee-table book by my ex-editor Simon Guerrier, in which I'm one of many authors interviewed.

It's a history of the fiction featuring Bernice Summerfield -- a series character for whom you may recall I've written on four separate occasions, most recently in The Vampire Curse. Simon has assembled quotes from a truly huge number of authors who've contributed to Bernice's life story under three different publishers[2], and my name crops up -- according to the index, at least -- on 16 of the book's 310 pages. (Oh, hang on, there's the index page itself. 17 of 318, then.)

A lot of this material echoes stuff you can read on the Extras pages on my website, but you do get the (very out of date) inside scoop on why a couple of people apparently considered it mildly controversial for Big Finish to be commissioning me in the first place. Nine-and-a-half short stories and two novellas for them further on, this seems a touch academic... but if you're interested it's neatly summarised in a box-quote on p194. Enjoy.

[1] Diapers, if you will. And if you will, please be my guest.
[2] Yes, three -- Virgin, Big Finish and Marvel UK. (And in fact the Mad Norwegian press reprint of Dead Romance is mentioned briefly on p88, but of course Bernice isn't actually in that one.)

Posted by Philip at 5:35 pm No comments:

Stray Thoughts Scraped from the Brain of a Recent Father

I'm writing this at 1:30 in the morning, with my son strapped to my chest. He's breathing gently, and occasionally stirring slightly. I keep worrying that he's too hot, or too cold. He's five days, three hours and twenty minutes old.

I won't be identifying him by name here -- privacy is rare enough on the internet, and I'm not going to blow it for him by naming him on a public forum before he's old enough to consent to it. As far as this blog's concerned, he's R.

Being present at a birth is one of the most draining, traumatic, shocking and paradigm-shattering experiences imaginable. I honestly think, until I actually saw R. emerge from his mother, I'd never believed that this was genuinely how it happened. I remember very clearly thinking, "My God, it's actually true!". Lord knows what I'd been expecting to see -- some kind of stork, perhaps.

My respect for people who voluntarily go through this experience on a daily professional basis has rocketed through the ceiling. Forget soldiers and firefighters, midwives may very well be the closest thing we have to superheroes.

I want to write a story now about anti-gestationists who believe babies come into being at the moment of birth and reject all this so-called scientific propaganda about foetal development.

To a regular SF viewer, a newborn baby looks like a none-too-convincing special effect. It's greyish-purple, it moves strangely, it's connected to a human being via a disturbingly organic-looking conduit, and looks unlike anything you've ever seen before. I remember finding the birth sequence in Children of Men oddly unrealistic, and feeling that it let down the rest of the film. I've a suspicion it matched what I saw on Sunday evening, pretty much frame by frame.

Incredible though midwives are, maternity wards are horrible places, full of hormonal panic and routinely violated privacy. B. and R. were kept in until Wednesday to be given antibiotics for a potential (and, as it turned out, mythical) infection. I was leaving them at 9pm, spending hours sorting stuff out at home and snatching a few hours' sleep before returning, if I managed it, for 9am. B. was having things far worse. The night they came home was an enormous relief.

Newborn babies are tiny vortices of need. Insofar as they have a personality at all, it relates to how their very basic needs -- for food, for sleep, for cleanliness, for warmth, for comfort -- stack up against one another. R. is particularly fond of comfort. I'm currently giving thanks daily for the invention of baby slings. (Not that our were bought -- they're six-metre by half-metre rectangles of stretchy fabric tied in a pattern designed by a genius.) It's thanks to them that I still have hands to call my own.

Yesterday was my and B.'s tenth wedding anniversary. To my utter astonishment, we actually managed to drive to a (not terribly good) restaurant, swallow a (not terribly good) meal and make it back home without R. regaining consciousness. He was blissed out on breast milk, and sleeping like... well, a baby I suppose.

I realise, of course, that this must be terribly dull for you, dear reader, unless you a) care about the individuals concerned, or b) fall into that demographic bracket which hasn't yet been through all itself this but has an active interest in doing so one day.

I'm not intending to turn this into a baby blog, as that would be a massive gear-shift and I doubt I'd be very good at it. (The blogging, that is, although now you mention it I'm far from confident of being any good at fatherhood either.) It does seem likely that there won't be much space for other things in my mind for a while yet, though. When there is, I'll do my best to mention them.
Posted by Philip at 12:53 am No comments: