Kim Stanley Robinson's Galileo's Dream is a a historical novel about Galileo Galilei, with SF interludes where time-travellers take him to visit the civilisation of human colonists living on the Galilean moons of Jupiter in 3020 AD.

This, at least, is true on the face of it (it's how Guardian reviewer Adam Roberts describes it, for instance). However, the history (though it is indeed meticulously researched) is continually inflected by Galileo's response to his revelations of the future, and in particular his efforts to escape the fate he has -- in these people's history but not in ours -- of being burned at the stake. While this certainly contributes much to an excellent novel of character and ideas, it renders it fairly dubious as a narrative based in historical events. (In this connection, the intervention of time-travelling agents using anachronistic technology at a crucial point in his heresy trial doesn't help.)

Galileo is richly and vividly imagined -- a brilliant, arrogant, insatiably inquiring character. We're spared neither the details of his various progressive illnesses nor his moral blindness, although the Jovians are there to comment and to challenge him on the latter (his conventional, monstrous treatment of his daughters, for instance) from what might just as well be the reader's 21st-century perspective. The novel's full of fascinating historical detail -- I hadn't known that the elderly Galileo met the young Milton, and Robinson makes a mordant play of their respective attitudes to blindness.

Philosophically, the novel deals with predestination and free will, understanding and ignorance, experimentation and revelation, in ways which are complex, subtle and never simplistic, involving some intricate inversions as the plot unfolds in the two timeframes. Just as in several other works of Robinson's (to which this is tied by a few links of continuity), future history becomes a vehicle for visionary writing. My main quibble is the same as Roberts' -- that (in a much lower wordcount than that of the painfully overlong Mars trilogy), the future society seen here isn't, by Robinson's usual standards, terrifically detailed or convincing.

It is, however, a bloody good read. Over this kind of length Robinson's style usually becomes dry, but that never happens here.

For ages I refused to read Terry Pratchett's Discworld subseries for young adults, the Tiffany Aching books. This was partly because I was annoyed by what I saw as a prevalent trend of packaging fantasy for children instead of adults (the same reason I've still not got round to China Miéville's Un Lun Dun), but mostly because I'd found the first book's titular characters too bloody annoying for words in Pratchett's earlier Carpe Jugulum.

This was silly of me, as I recently discovered after caving in and reading the first two: The Wee Free Men and A Hat Full of Sky. They're excellent novels about the lived experience of childhood, and tiny smurfish scots-speaking fairies play a relatively minor role in both. Carpe Jugulum was a poor novel which fails to live up to the promise of its "Witches vs Vampires" premise, whereas the two Tiffany books are excellent character studies of a young witch, which endeavour to deconstruct the fantasy clichés of certain other magical coming-of-age sagas I could mention.

Tiffany's experiences are both universal and highly individual. Her relationship with the Nac Mac Feegle (who, to be fair, are often very funny here) is subsidiary to the story of her origins and training as a witch, and her developing relationship with Granny Weatherwax, possibly Pratchett's finest continuing character since Equal Rites, who -- on the showing of these first two novels -- might end up as either her mentor or her archnemesis. At the same time, Tiffany's growth into a place in the adult world, her recognition of the various darknesses inside her and her learning to embrace and transcend them, are archetypal aspects of a child's journey into adulthood.

So yes, I was wrong. And I need to read Wintersmith and I Shall Wear Midnight as soon as possible. Happy now?
Posted by Philip at 10:00 pm 7 comments:

Email ThisBlogThis!Share to TwitterShare to FacebookShare to Pinterest
Labels: and here's to you kim stanley robinson, books

Right. I've repeatedly promised you book reviews, and despite the manifold distractions in my life at present, I am -- or at least, I strive to be -- a man of my word[1].

As it turns out, it's going to take several instalments. So here's the first...

First, Rivers of London by Doctor Who novel alumnus (and my one-time fellow contributor to this volume), Ben Aaronovitch. It's an urban fantasy with a strong narrator -- PC Peter Grant, a young policeman of mixed English and African heritage who's recruited to the minuscule division of the Metropolitan Police which deals with magical crime. It's a lovely mix of police procedural with magic -- not in itself unique, but the firm grounding in a contemporary London setting gives it a quite different flavour from, say, Terry Pratchett's City Watch novels.

Aaronovitch's love for his setting is very evident, based in historical events dating back to the Roman founding of the city, but embracing its present in its full multicultural glory. One particularly refreshing aspect is that none of the senior figures in the Met express the usual tedious scepticism about the phenomena Peter and his boss deal with -- to them, it's just one more jurisdictional turf war. The villain's identity is a very clever choice, and the mayhem sown by them is often graphically horrific.

If I have a reservation, it's that the prose -- narrated by the clear-headed and down-to-earth Peter -- reads like a superior quality bestseller. It's a canny commercial choice, but I do miss the more refined "literary SF" style of Ben's previous novels. Nevertheless, I'm looking forward keenly to reading the sequel, which turned up on my doormat yesterday. 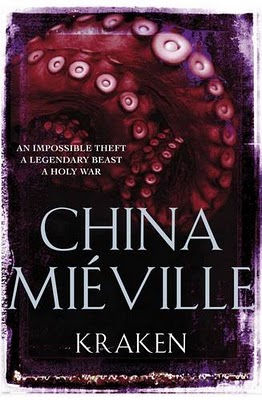 I wasn't expecting, when I read Rivers of London, to be almost immediately reading another London-based fantasy involving the magical division of the Met, but then I started Kraken by China Miéville [WARNING: Link contains radical politics which may disorient and confuse]. Here the police are not uncomplicated heroes, or indeed the viewpoint characters, although they're not unsympathetic either.

The main character, though, is... well, it's complicated. It involves the Natural History Museum, taxidermy, giant squid cults, various supernatural custodians of London's cultural heritage, in vitro fertilisation and the power of throwaway banter to change the world. The world he moves through is enormously more complex still, although cults and magic of various inventive kinds play a substantial role. The book's relentlessly inventive -- it feels like Miéville's let everything fantastical which came into his head during the writing of the highly disciplined The City and the City spill over into this volume, and the results are pyrotechnic.

Miéville's perennial habit of mashing together radical politics with fantasy tropes here becomes hilarious. My favourite weird concept -- although there are many worth mentioning, including some unexpected twists to the works of WH Hodgson and HH Munro -- is Wati, the Ancient Egyptian shabti figurine who led a proletarian revolt in the Duat and now organises a union of golems, familiars and other magical assistants.

Miéville's style is distinctly literary, so much so as to be difficult at times. In my current sleep- and energy-deprived state[2] I found it a challenge, but I like a challenge. His dialogue, in particular, is startling in the vividness with which he portrays completely different speech-patterns, slang styles and idiolects. (The main police character is, once again, a young PC and magic-user, female this time -- but a novel narrated by this one would make for an extremely tough read.) Yet again I'm looking forward to the author's next novel with keen anticipation.

Reviews of books not featuring magic policemen will follow shortly.

[1] Admittedly my word is "lenticular", but I do the best I can with it.
[2] R. is well over a year and a half old now. I was, to be honest, expecting parenthood to have got just a little less intense by this point.

Posted by Philip at 9:45 pm No comments:

1. Buy new cooker online. Take careful note of the terms and conditions, which state that unless your existing cooker is thoroughly disconnected at time of delivery, the delivery staff will neither take it away nor install the new one for you.

2. Spend an evening with your head in a cupboard disconnecting wires.

4. Receive phone call informing you that the delivery staff have accidentally dropped your new cooker, which is now in bits, and that it will take a week to procure a new one from the manufacturers. Explain angrily that there's no way you'll be able to reconnect the old cooker safely, and that this means you'll be spending a week preparing meals for two adults and a one-year-old using a camping stove.

5. Spend a week preparing meals for two adults and a one-year-old using a camping stove.

7. Welcome delivery staff. Listen in appalled horror as they inform you that you've been too thorough in disconnecting the old cooker, that they need to reattach some of the screws you took out from the junction box, and that this is utterly, completely infeasible without a magnetic screwdriver, which, oops, they happen not to have with them that day. Watch as delivery staff demonstrate that, look, they're trying their best but, ooh, it's really hard.

11. [Optional] Agree to throw in new cooker free if potential buyers agree to purchase your house. Repeat from 1.
Posted by Philip at 12:29 pm 3 comments:

I'm working on a book review post. Honestly I am.

In the meantime, on with the plugging. Here's the updated cover of A Romance in Twelve Parts, due from Obverse Books on 31 May:

Note the rather lovely use of the blended-case font last used back in 2003-04 by Mad Norwegian for the titles of This Town Will Never Let Us Go and Of the City of the Saved....

You may also wish to speculate about what kind of animal that skull might belong to.

In other Obverse news, Stuart Douglas has recently announced a really exciting new venture -- periodical anthology series, the Obverse Quarterly, aimed at genre fans with eclectic tastes. Subscribers will receive four marvellously eclectic collections of short stories each year. (Individual titles can be bought separately, but as far as I can see the quirky mixture of styles and sources is part of the charm.)

The first four volumes are:All of which sound fantastic in their respective ways. The only one of those which doesn't immediately appeal to me is the horror anthology, but the pricing structure cleverly means it's £1.97 cheaper to subscribe to a year's worth of titles than to buy three individual ones.

I should clarify that I've no personal investment in any of these four volumes (although I've hopes of becoming involved in future years, naturally) -- I just think that this is a fascinating project for a contemporary small press to be embarking on, and want to publicise it as widely as I can. Which means telling all of you lovely people about it.
Posted by Philip at 6:20 pm No comments: