I'm predictably late in blogging the fact, but I feel we -- where "we" means cinema audiences -- have been almost unprecedentedly privileged this summer in having the opportunity to see two new pieces of intelligent, well-made SF drama.

I'm talking, of course, of Moon and District 9: set respectively in a cramped mining station on a relatively near-future Moon, and in a boderline-alternative history where South Africa became home to a population of extraterrestrial refugees in the late 1980s. Neither creates an original SF premise -- indeed, both are rather derivative, in ways I'll explore shortly -- but they do what the best of SF cinema does, using familiar tropes as springboards for clever, thought-provoking human stories with real intellectual significance.

Of the two, I prefer Moon, although I wouldn't argue with those who point out that District 9's the more important film. Moon is unexpectedly written and directed by Duncan Jones -- a man who evidently now rejects the only other fact I and the rest of the world knew about him, that his father had given him the name Zowie Bowie[1] -- and stars Sam Rockwell, who I only remember as Zaphod in the regrettable film version of The Hitchhiker's Guide to the Galaxy.

I went in without notably high expectations, and emerged raving. Moon is low-key, non-blockbustery SF drama reminiscent of the best examples of the genre before Star Wars ruined it for adults: Dark Star, for instance, Silent Running, or even the monolithic 2001: A Space Odyssey. (It also reminded me of Solaris, which is odd as I've somehow managed never to see either film version, or indeed read the novel.) Well-imagined, claustrophobic sets complement a small cast; although there's plentiful well-written dialogue, the central revelations are conveyed through almost-silent visual sequences. Although the special effects are excellent (and must have been very demanding to achieve), the script is such that most of the time I didn't even notice they were there.

Moon is definitely a film whose plot you want to avoid having spoiled, so I'm putting the rest of my comments in white (highlight the text to read it). Rockwell's role, whereby he needed to portray the clone protagonist and his clone antagonist / ally as essentially the same person after different life-experiences, must have been a daunting one, and he pulls it off brilliantly well. The other iterations of the character, in their brief appearances, are also distinguished in subtle shades. Purely from this point of view (and leaving aside the effects work which must have been involved in creating, for instance, the scene where Sam plays table-tennis against himself), the film's a tour de force.

It's also, of course, a clever meditation on the nature of human identity and where it resides -- while the Sam clones are unquestionably entitled to the same rights as the original Sam, and their callous exploitation at the hands of Lunar Industries is an atrocity, it's also clear that each of them is his own person, sharing a base personality and many memories but with a unique identity.

The one element of the film which doesn't quite fit the rest is the one which reminded me of Solaris: the soon-to-be-dying Sam's visions of the original Sam's daughter, appearing as the teenager she now is, despite being as far as he knows a toddler. This adds an odd, but appealing, edge of mysticism to an otherwise hard-edged piece of humanist storytelling.

Oh, and I loved the way Kevin Spacey's A.I. character subverted expectations by turning out noble in the end. I'm desperately hoping someone's going to get me the DVD for Christmas.

District 9 is a very different animal. You couldn't accuse it of being low-key, although the early exploration, through documentary and found footage, of its only slightly alternative world gives a pleasingly bleak and deceptively low-budget feel. The aliens are a generic underclass (the middle-class human characters being a significant though unremarked mixture of white and black), and our view of the slum from which they variously beg for drugs, thieve from humans, set fire to stuff and scrabble for a living on rubbish heaps, would dehumanise them quite effectively without the deliberately alienating insectoid design.

I'll spoiler-protect this one, too, although I think it needs it less -- if only because it's obvious from about 20 minutes in (if not before) that there's only one direction in which the story can go.

I was disappointed when this storytelling device was abandoned -- from the early scenes I'd been anticipating something more in the style of Cloverfield (except better, obviously -- perhaps I mean more like The Office, only with aliens). In fact the film falls broadly into three chapters, only the first of which uses the faux-documentary effect. The second is rather tedious gross-out body-horror (a genre I have little time for, to be honest, so I probably wasn't its best audience), and the third a less-dumb-than-usual action-movie climax.

I've had an interesting discussion with Not Invented Here about how these disparate styles are unified by the protagonist's journey. In the opening scenes Wikus van der Merwe is a corporate lackey, his worldview as objectifying as that of the documentary cameras. As a likeable and rather wet hero who acts as a willing instrument of fascism because it's his job and he doesn't want to fuck it up, he's one of the most effectively shocking portrayals of evil I've seen in film. Later, he descends into poverty as one of the underclass and becomes radicalised by the experience -- and as N.I.H. points out, the appropriation of these other SF subgenres, body-horror and schwarzeneggerish action, mirror that in metaphor rather nicely.

However, I felt that these three elements were insufficiently well married together, and in particular that they resulted in distressingly incoherent worldbuilding. The objectified, frankly disgusting aliens of the first third are humanised for us, not through subtle revelations, but through subtitling their dialogue to make it clear that their thought-processes are exactly like ours, and by giving one of them a cute big-eyed spielbergsque lobster-child. It's a copout, and compromises the integrity of the first part. Some of the differences can be rationalised by the fact that Wikus's alien friend and his son are clearly of the officer caste in the aliens' hive-system, but even so it's very tricky to reconcile the grim, shit-smeared arrival of the aliens in the opening montage (in which Close Encounters of the Third Kind is cleverly evoked in order to be scoffed at) with the disneyesque departure of their representatives at the end.

Nor does the central mcguffin have any logic behind it -- no matter how biological the enineering of the aliens' technology may allegedly be (and it all looks mechanical or electronic to me), it makes no sense that exposure to their fuel would mutate a human into one of them. As a method of alienating the protagonist, it's rather less sensible than the plan of the Nigerian gangster characters to take on the aliens' characteristics by eating their body-parts.

These elements felt as if they needed more thought -- which, in what was overall such a thoughtful film, seemed to me a bit of a letdown. Unlike Moon, which felt damn near perfect, I didn't feel it hung together completely as a narrative.

When District 9's most obviously about apartheid, and more generally about the casual subjugation of individuals whom society views as less than human, it's quite devastating. As Not Invented Here's also said, the significance of such a film coming out of South Africa itself (albeit with international money) can't be underestimated. It's just a shame that the film as a whole doesn't, or so I felt, follow through on that initial promise.

I'll still be getting it on DVD, I suspect.

[1] There's a "Moon Unit" joke in there somewhere, but I don't think I've got the willpower.

Posted by Philip at 4:40 pm No comments:

Not So Long Now

This year, for the first time since 2004, I didn't blog the Greenbelt festival (of faith, art, music, activism, food and stuff in general) for Surefish. Those of you who've been paying attention may be able to guess one reason, which is that Surefish haven't actually been paying for new content since a while ago now. The other is, of course, young master R., who rather restricted our attendance this year. 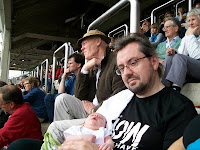 Nonetheless, we did manage to get from Bristol to Cheltenham for day trips on Saturday and Monday. At three weeks old R. remains something of an impediment, of course, and the one alternative worship session we managed to get to consisted largely of a breast-feeding, nappy-changing and baby-quietening marathon.

Still, we managed to attend and pay attention to a number of the events as well as generally appreciating the atmosphere.

This year's festival theme was "Standing in the Long Now", about which I was rather enthusiastic -- the long-term futurological thinking of these people being something I feel the world in general could do with very much more of. Sadly, aside some rather nice theming in the aforementioned worship session (which, of course, we hardly got the chance to see), the only evidence of the festival organisers drawing inspiration from this source was the slogan "Now is all we have" on a T-shirt (see illustration above).

A panel discussion on whether Doctor Who and its ilk should be frightening children (for both moral and aesthetic values of "should") benefitted hugely from the erudition of its panel, who included two Doctor Who authors and a vicar who used to draw Judge Dredd.

Kester Brewin's two talks on, respectively, "A Plea for Christian Piracy" and how physics might inform faith, were highly entertaining idea-play: the former reinterpreting 18th-century freebooters as revolutionary proto-anarchists, and the latter ranging through higher-dimensional spaces as an analogy for divine revelation and the many-world hypothesis as a justification for heaven, hell and immortality.

(Mind you, my question at the latter, about the alternative lives of Jesus and how they might knock the crucifixion from its central place in atonement theology, seemed to throw him rather. I might see if I can talk about something along those lines next year -- fortuitously themed "The Art of Looking Sideways" -- if a) I get time and b) they let me.)

Brewin also pointed out that "atom" and "individual" have the same root meaning, which had somehow never occurred to me before.

Aside from sessions with various friends at the Moroccan Pizza Tent, the Tiny Tea Tent, Nuts Wholefood Cafe and the Jesus' Arms pub tent (the last being a godawful letdown after the past two years, due to a change of franchisee -- we must give the organisers some feedback on that), the only other organised event we attended was a promotional gig by Jasper Fforde. Sadly, Fforde's overly high estimation of his own cleverness comes through in person as strongly as in his books, so we went away from that slightly irritated.

As ever, I appreciated the visual art as much as any of the talks, and was particularly impressed by these photos. I'd have liked to have seen more of these paintings as well, but unfortunately there was a guided tour in the way when we managed to make it there. Those we saw were great, though. We also managed to pick up a limited edition print of a rather incomprehensible artwork by Billy Childish. 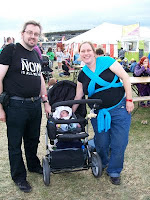 Our partial attendance meant that we missed, among others, Robert Beckford, Michael Ward, Pete Rollins, Alister McGrath, Iain Sinclair and Gene Robinson, as well as any of the christian-muslim dialogue events (which the organisers depressingly felt the need to justify to their christian attendees in the programme). Any or all of these might also have been splendid, but circumstances weren't really on our side.

We had a fantastic time anyway, brief though it was, and look forward to managing longer next year.
Posted by Philip at 3:29 pm No comments: