Aargh. Blogger just swallowed my entire post, like the gigantic devouring worm at the heart of the world. I'll do my best to retype it while it's relatively fresh in my mind.

So. You were probably expecting me to say this, but I haven't had a great deal of opportunity to read or write of late. In the ten weeks since B. and I successfully procreated, I've managed a handful of books and a bare few thousand words in those respective areas.

I'm generally less impressed than I expected to be by the first three books of Ian "definitely not Robert" Rankin's Rebus series[1]. The first of them, Knots and Crosses (which I happened to start in the hospital delivery suite) is probably the most interesting, but then it's a vaguely psychological novel whose protagonist is a policeman, rather than anything resembling a crime novel in the genre sense. Certainly its plot twists aren't the least expected I've seen: [SPOILERS] We learn early on that Rebus has a) an unidentified enemy who mysteriously seems to know him, b) repressed memories from a traumatic period in his past, and c) a brother who's a professional hypnotist. Goodness, I wonder how those elements might end up fitting together?

On its own terms, Knots and Crosses is a reasonably good story about the repression of guilt and the chaotic eruption of the same. As the first in a bestselling series of detective novels, it's distinctly peculiar. It doesn't give the impression that Rankin intended to write one sequel, let alone sixteen.

Hide and Seek covers similar ground: it's slightly more polished, but as a crime novel it noodles about aimlessly, conveying little sense that Rankin is interested in crime and police work rather than his psychologically aberrant characters.

Tooth and Nail is interesting primarily for its Scottish perspective on London -- and it takes an unholy delight in smashing the place up during the climax -- but the story depends on two huge cheats[2]. Rebus is losing his original personality at an alarming rate, while developing a habit of solving crimes by having the solution wander randomly into his lap. Inspector Morse he's not.

Now I have Strip Jack[3] sitting not six feet away, waiting for me to open it, and I'm not entirely sure I won't to return it to the library unread. Especially since I found a copy of Tales of the Dying Earth in a secondhand bookshop the other day, and that looks a lot more enticing right now.

I'm sure I read Roger Lancelyn Green's The Adventures of Robin Hood when I was a kid, but I remembered very few of the specifics apart from that deathbed bury-me-where-the-arrow-falls-twang-argh scene. It's fun, and does a good job of summarising what we know of the Robin Hood legend from the various literary sources. I found it very readable, but it's over five decades old, and I'm not sure how accessible it would be for a modern child. Hopefully the progeny will be able to enjoy it at some point, though. I'm also meaning to get around to rereading Geoffrey "not Henry Treece" Trease's unashamedly Marxist interpretation of the legend, Bows Against the Barons. Which should be fun. 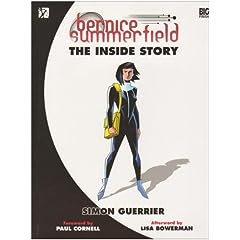 I've mentioned Simon Guerrier's weighty reference book Bernice Summerfield: The Inside Story here before. Now that I've read it, I can reveal that it's interesting in parts, but way too long. I did enjoy the history of Bernice during the Virgin era -- although to be honest I'd have been more interested in a history of those books which didn't focus quite so centrally on the one character, marvellous though she is. However, when Simon moves on to the Big Finish books and especially the plays, -- this being the area with which he's been personally involved and where he presumably has better access to the material -- the book becomes painfully bloated, padding out the interesting material with anecdotes about actors hanging around recording studios eating lunch. Much as I love Benny in all her guises, I'd have preferred a substantially shorter and more focussed work, which didn't appear quite so skewed towards her current publisher.

(I agonised about whether it was fair to Simon to write all this on my blog. Then I remembered the box-quote on p194[4], and realised that it would be terribly ironic if I didn't.) 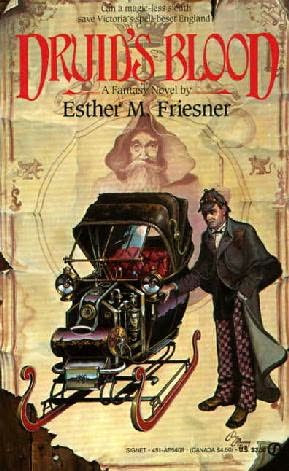 And speaking of detectives, fantasy, British folklore and characters personally known to Mycroft Holmes... Druid's Blood by Esther M. Friesner is possibly the weirdest reinterpretation of the Sherlock Holmes mythos I've yet encountered, being set (supposedly -- see below) in an alternative history where British druidic magic has kept the island safe from invasion since Julius Caesar's time. It came recommended by Paul Magrs -- and I can see why he likes it, its joyous eclecticism being very reminiscent of his own more playful novels. Unfortunately I'm not convinced it's all that good -- it's certainly not up to the standard of Paul's own Brenda and Effie sequence.

The story's founded in a solid (if rather formulaic) fantasy plot, and it takes an interesting view of Holmes, Watson and the relationship between them. There's also a lot more shagging than one usually finds in Victorian pastiche, and it even makes a rather tentative attempt to tie Holmes the folk-hero in with the far more ancient tradition of the dying and resurrected god.

However, the book has a number of issues which I found very difficult to clamber over.

1. The worldbuilding. Personally, I like alternative histories which think through the logic of events in their reimagined timeline. This isn't one of those. We get some sense of what's been happening in Britain over the past eighteen or so centuries, but there's no attempt to explain how ancient British monarchs such as Bran the Blessed and Arthur have been succeeded by such later specimens as Richard III, Henry VII, Elizabeth I, Charles II, George IV and ultimately Victoria. Given that this world's Britons have remained ethnically distinct from the Welsh and Scots Picts, let alone the French, Germans and Dutch, for the royal bloodline to have thrown up these same individuals beggars belief.

2. The worldbuilding. Nor is there the slightest consistency to it. Consider: Oscar Wilde is real in this world, as are George and Ada Byron, all of whom are much as history remembers them (apart from another set of inconsistencies, which I'll come to shortly). Arthur Conan Doyle is real, but his name's Arthur Elric Boyle. H.G. Wells is real, and has a time machine. Jack the Ripper is real, but turns out to be the goddess Kali (who at least has the merit of being a previously unidentified suspect). John H. Watson is real, but his background's entirely different from Doyle's fictional character, and his surname's Weston. Bram Stoker's Renfield is real and runs an upmarket restaurant (which is quite a funny in-joke until Friesner starts labouring it). Sherlock Holmes is called Brihtric Donne, and is -- strictly speaking -- fictional, being an imposter who's taken his identity from Weston's (not Boyle's) stories in the Strand.

So -- is Friesner presenting a world where what we know as fiction is reality, as in Alan Moore's League of Extraordinary Gentlemen? Or one where fictional characters coexist with their creators, like Kim Newman's Anno Dracula? Or one where writers' own fantastical experiences infuse their fiction, like -- say -- most of the portrayals of authors in Doctor Who? Or a history that's meant to be vaguely plausible, including a mechanism whereby the fictional Holmes can appear? She doesn't seem to have a clue.

3. The worldbuilding. And she doesn't even know what period of history she's trying to cover! While we're clearly in a pastiche nineteenth century (never identified as such because Britain is, of course, pagan rather than christian[5]), the characters in Druid's Blood include Lords Wellington (1769-1852), Byron (1788-1824) and Kitchener (1850-1915), and the authors Dickens (1812-1870), Wilde (1854-1900) and Wells (1866-1948). You don't have to be a literary historian to work out what's wrong with this picture. Surely if something as contingent as the royal line of succession has stayed constant, most people would need to have the same dates of birth and death in Donne's world?

Admittedly the fantasy elements on display include magical longevity (the long-retired Charles II is also a character, for instance), as well as resurrection and time travel... but the few clear historical markers we're given (Victoria is a genuinely young woman, Dickens is working on, ahem, The Mystery of Edwin Druid, the Ripper is stalking the East End[6]) are equally contradictory.

Despite appearances, fantasy simply isn't a genre where anything goes. Any fantasy world needs its own rigorous rules -- rather more so, in fact, than fiction that's in closer contact with recognisable reality. It's setting those rules where the creativity of fantasy lies. Friesner just can't make up her mind what her rules are, and worse, she doesn't seem to feel it's particularly important. Consequently, the reader is left struggling to understand how this world works, and not altogether sure that he or she cares. Why should we, when the author can create new elements by fiat any time she wants to?

4. Cultural cringe. Although she's clearly read widely -- The Mabinogion, Caesar's Gallic Wars and possibly even The Golden Bough as well as the Holmes canon -- Friesner remains one of those charming anglophile Americans who doesn't know British culture nearly as well as she thinks she does, and isn't afraid to demonstrate it. Aside from getting a vague sense that Cornwall was located somewhere in Wales, itself possibly an island off the Devon coast, and that Stonehenge stands a short distance outside London, I kept wincing at her Vandykean attempts at local dialect and some startling uses of vocabulary.

Some examples, off the top of my head and without referring to the book: "tweeny" is used as a formal job title, "bobs" is used as the plural of "bob" (as in shilling), an aristocrat who shows no particular signs of being also a judge is addressed as "m'lud", and -- most wrongly of all -- "public school education" is used as if it refers to an education which members of the public might get at school. To be sure, this is a different world -- but the intent is clearly that it's the same as the real Victorian England except in certain identified respects. In that context, these errors are just embarrassing.

6. An earworm. Finally -- and, one might suggest, least importantly -- I had the New Vaudeville Band song "I Was Lord Kitchener's Valet" running through my head all the while I was reading it. Which was annoying.

Druid's Blood is interesting, and quite a lot of fun at times -- Friesner seems in general to write comedic fantasy, and although I wouldn't describe Druid's Blood that way, the fact does make rather more sense of its peculiarities.

I'd recommend it as a curiosity, though, rather than as a fantasy novel, an alternative history novel or a piece of the Holmes apocrypha.

[1] Usually referred to as the "Inspector Rebus" series, but in Knots and Crosses he's only a sergeant.
[2] SPOILERS: The serial killer turns out to be a walk-on character whom we met briefly in one scene... and due to some vague guff about schizophrenia isn't even the same gender as the viewpoint character in the murder scenes.
[3] He abandons the themed titles after the first three novels, which is a shame.
[4] "I have a somewhat robust attitude to criticising others' writing" -- Philip Purser-Hallard.
[5] In fact there's no mention whatsoever of christianity, even in discussion of the outside world's history. One might construct a chain of events whereby the repulsion of Claudius's invasion attempt eventually meant that, say, Constantine never adopted christianity as the imperial religion, but there's not a hint of such a thing here.
[6] These would be roughly the 1840s, the late 1860s, and 1888.

Posted by Philip at 1:00 pm No comments: