My living-room's full of women and babies at the moment. And stray toys which squeak underfoot. And discarded food. If I hide up here long enough, they might go away.

I may also be able to bring you up to date on the books I've managed to finish since 10 January, because I know how much that sort of thing always interests you. 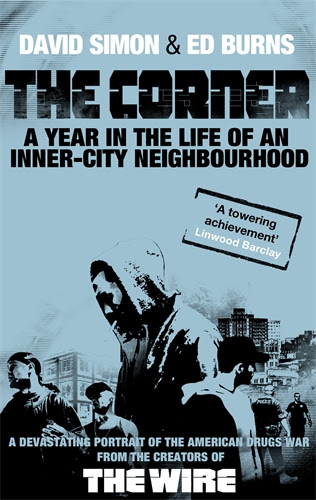 I asked for The Corner: a year in the life of an inner-city neighbourhood by David Simon and Edward Burns last birthday, as I suspect many readers have, expecting to get some insight into The Wire, the greatest and most close to platonic perfection of the 21st century's TV drama series to date. There is some of that -- mostly a good view of the scaffolding underlying the writers' creative processes, and in particular the raw materials used for creating some of their most memorable characters. But mostly this is a painstaking anatomical study of addiction, of despair, of grinding poverty and alienation, and of the occasional, heartbreakingly hard-earned, redemptive breakthrough.

It's a powerful piece of writing, and a tribute to the compassionate values which underlie liberal journalism at its best. But if you were depressed by the bleak view of human nature, and of inner-city Baltimore in particular, seen in The Wire -- where characters at least struggle against the inevitable, some of them from positions of remote nodding acquaintance with power -- well, you probably want to read something a bit cheerier and more pinkly fluffy than this. Dostoyevsky, say. Transition is a science-fiction book by Iain Banks, and as such has been hailed as breaking down the barriers between Banks's "M" and "non-M" writing personas. This is a cosmetic readjustment at best. The "M." tag has attempted to label one specific, narrow portion of the spectrum through which Banks's work runs: from, on the one hand, realistic novels where multi-generational dysfunctional families interact in ways which illuminate broader global issues, to, on the other, sci-fi stories about robots and aliens and spaceships crashing and SHIT BLOWING UP. The former type could be written by a slightly geekier Ian McEwan, the latter by a literate E.E. 'Doc' Smith.

The books tagged with an "M." tend to be the most unambiguously space-operatic, with the occasional oddity such as the post-cyberpunk jargonplay of Feersum Endjinn or the allusive pseudo-Mediaevalism of Inversions. The "M.-less" books, on the other hand, are a ragbag of realism (Espedair Street, Whit, Dead Air, The Steep Approach to Garbadale), detective novel (The Crow Road, Complicity) and gothic conspiracy theory (The Wasp Factory, The Business), including a couple of post-apocalyptic futures (the frankly tedious Canal Dreams and A Song of Stone) and reality-warping fantasies (Walking on Glass, The Bridge) which would have looked quite at home with an "M." on them.

So it is with Transition. The premise may be that a shadowy conspiracy known as "the Concern" has been manipulating the diverse histories of many worlds across the multiverse to unknown, but presumed benevolent, ends... but underneath it all the story's about capitalism, religious fanaticism and cultural imperialism: in short, The Way We Live Now. SF at its best does illuminate the real world, of course, and much the same agenda is at work in Banks's Culture novels. As I say, this is a spectrum of shades, not an author turning his literary credentials (or indeed his imaginative faculties) on and off with a keystroke.

The book itself is awkwardly-shaped, its actual story amounting to little more than one extended capture-escape-capture-escape cycle, with most of the interesting material told in flashback. Unfortunately, two strands of this -- illustrating respectively capitalism and fanaticism -- are imperfectly integrated with the rest of the novel, being the first-person backstories of minor characters whose contributions to the plot are tangential at most. The sheer bulk of this material means that the central storyline relating to the Concern proper, the rebellion against it and the speculation as to its true agenda, feels perfunctory. There are some authentically Banksian edifices here (literally so sometimes, as with the palace hollowed out of one universe's Mount Everest by a long-dead Emperor of the World), but they don't appear to have been subjected to much city planning. If I were feeling uncharitable I'd say Transitions was a much shorter novel and two fundamentally plotless novellas, in search of a competent editor.

This is a shame, because the story of the Concern is a fascinating one, which could have been developed at far greater length and over a wider range of excitingly architected worlds. It even feels as if the author's keeping secrets from us. Why, for instance, is the chief rebel against the Concern occasionally referred to as "the younger Mrs Mulverhill" when an older woman of that name is never mentioned? Is there an unspoken connection between Mulverhill and Madame D'Ortolan, the Wicked Queen running the Concern? Why do their surnames suggest "mother" and "daughter", and if the reason is the obvious one why are their ages the wrong way round? It feels as if Banks knows the answers to these questions, and is teasing us -- perhaps with a sequel in mind, although he's not been one for the direct follow-up in the past. Unfortunately there's not enough of substance in the book to justify it spilling over in this way.

Transition is fun, nonetheless, and works on the basic level of a fix for the many of us long since addicted to Banks's work. But it continues a recent trend towards less coherent recycling of past themes and ideas, and the cosmetic novelty of its presentation fails in the end to disguise that.

The Panda Book of Horror ed Stuart Douglas and Paul Magrs is Obverse Books's follow-up to Iris Wildthyme and the Celestial Omnibus. There's no doubt that Obverse hit the ground running with The Celestial Omnibus, which although it sold modestly was near-universally acclaimed by those who read it (and coincidentally also contains my latest published fiction to date). The Panda Book of Horror, a sly parody of the old Pan Books of Horror Stories of the '70s, consolidates and improves on that success. Having a unifying theme tightens the volume up no end, and although I've never been a big reader of the horror genre I enjoyed those stories which attempt to follow it just as much as those which parody it with a rib-nudge and a cackle.

None of the stories are less than splendid, but the opening and closing numbers are particularly good: Ian Z. Potter's "The Unholy Ghost" features clever, very funny prose and an eye-watering last-minute plot twist, while Mark Clapham's "Channel 666" turns nostalgia TV into an all-too-convincing manifestation of Hell and follows up with an equally brilliant conclusion. My favourite story, though, was Matt Kimpton's "Shadows of the Time Before", which depicts an eldritch Lovecraftian universe of creeping horror and squamous decay, whose rugose inhabitants are appalled at the cheerful irruption of a boozy, shabby party-vixen like Iris Wildthyme into their lives.

That same Mark Clapham edited Secret Histories, the other book of short stories I've read this year. The unifying conceit of this one is that all the stories are told by the heroine -- Bernice Summerfield, of whom you'll certainly have heard me speak (and very likely seen me write). This collection's more of a piecemeal affair, although there's a rather notional through-plot and a few of the stories have closer links. Nonetheless, there's some fine writing here from Lance Parkin, Jim Smith (a sterling story featuring Bernice's old friend Mycroft Holmes), Jon Dennis and the increasingly inimitable Cody Schell. I think my favourite here was Mark Michalowski's elegantly evocative "The Illuminated Man", an everyday story of Edwardian circus folk.

(And yes... for the sake of full disclosure all the authors and editors I've mentioned with respect to these anthologies are friends of mine. Except Matt Kimpton, who I don't believe I know from Y-chromosomal Adam.) 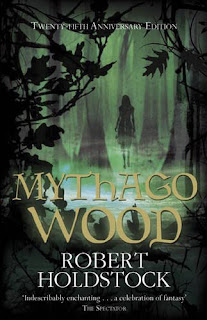 Most recently, I've reread Mythago Wood by Robert Holdstock, who reminded me of its existence by dying last November. I remember reading it as a teenager and being wholly enthralled by the central conceit -- a stand of ancient woodland whose near-impenetrable interior opens tardistically into the vast forested landscape of the human collective unconscious, replete with unreconstructed archetypes. The central story is itself deliberately mythic, with two brothers in the 1940s falling out over a woman (albeit the archetypal form of a Brythonic folk-heroine) after the death of their father (who lives on in Freudian form in the forest as an ancient, murderous beast-god). I enjoyed revisiting it, and was reminded of one possible source of my fascination with stories where different periods of history and prehistory rub shoulders. The "mythago" characters we meet in this book range from World War I back to the last Ice Age.

I seem to remember I tried the sequel, Lavondyss, and didn't get on with it. Well, I'd only have been 16 or so. I might well try it again, although I'm slightly daunted by the fact that Holdstock seems to have squeezed out five more books in the series, the most recent being published last July. Still, in the "interminable series by authors I actually quite like" stakes, it can't possibly rival the Mars trilogy.
Posted by Philip at 3:27 pm

(Please sign comments -- it helps keep track of things. Offensive comments may occasionally be deleted, and spam definitely will be.)